Top Myths About Fillers and Botox for Men

Botox and fillers, like Juvederm or Restylane, are among the most popular cosmetic treatments across the country and their popularity continues to grow—especially among men. Between 2000 and 2017, there was almost a 400 percent increase in the number of men who received Botox, according to the American Society of Plastic Surgery. Almost half a million of these procedures were performed on men in 2017 and the number continues to grow.

As more men see the advantages of cosmetic treatments, it’s time to take on myths that may keep men from improving their appearance.

Myth: Botox and Fillers Are Only for Women 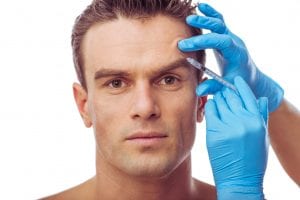 As stated above, hundreds of thousands of men are receiving these treatments each year. Men often seek out these treatments at a later age than women, but for similar reasons. Men state that they undergo these procedures to help improve their careers and their dating lives. Looking younger or less angry (no furrowed brows) can help them better succeed in both.

Myth: Cosmetic Procedures Make You Look Feminine
When administered by experienced technicians, Botox and fillers only enhance your natural appearance. They smooth out wrinkle lines and help restore a more youthful, boy-like appearance. Feminine faces tend to be thinner and softer in appearance; neither Botox or fillers will make your face look thin or soft. Instead, they make your face look smooth and firm.

Myth: Other People Will Know I Had Botox or Fillers
Again, when administered by experts, Botox and fillers look very natural. While people may say you look energized, it’s unlikely they’ll be able to put their finger on why.

Both procedures also take little time and have no downtime. You can get these procedures done over your lunch break and immediately return to work. Without downtime, it’s unlikely anyone will guess you had any cosmetic treatments.

Myth: Botox and Fillers Won’t Help Me
These procedures can help with a variety of issues, from crow’s feet to bags under your eyes, wrinkles around your mouth or lines in your forehead. Almost any person, man or woman, is going to be facing these issues starting in their 40s.

Men often don’t realize the affect their appearance has on their self esteem until they’ve taken steps to improve it. After your treatment, you’ll see a younger man in the mirror, which can provide a huge boost to your confidence.


At the Spa and Laser Center in Virginia Beach, we offer natural-looking Botox and filler treatments for men and women to help you achieve a younger-looking appearance. Contact us today at 757-965-7444 or schedule your spa appointment.